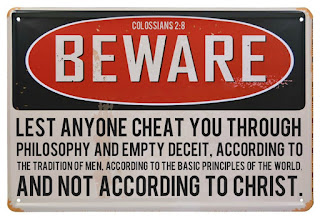 We need to heed Paul’s warning in Colossians 2:8-10.  “See to it that no one takes you captive by philosophy and empty deceit, according to human tradition, according to the elemental spirits of the world, and not according to Christ, for in him the whole fullness of deity dwells bodily, and you have been filled in him, who is the head of all rule and authority.  We need to be careful that we are not taken by the love of wisdom and empty deceit, according to human traditions.  We need to be taken captive by Jesus Christ, who is the one true God in the flesh and over all rule and authority.

We need to obey Paul’s command in Romans 12: 1 – 2.  “I appeal to you, therefore, brothers, by the mercies of God, to present your bodies as a living sacrifice, holy and acceptable to God, which is your spiritual worship.  Do not be conformed to this world, but be transformed by the renewal of your mind, that by testing you may discern what is the will of God, what is good and acceptable and perfect.”

Why do a class at TBC on Current Issues?

During this class, we are going to look at issues of race, justice, and life but even more than that we want to look at what God’s word says about how we are to live for His glory in relationships with one another.

So, why do a class at TBC on a Biblical Understanding of Current Issues?

Because the Bible is our authority, we want to focus on the most important thing – God, the Father, the Son, and the Holy Spirit.  We do this for our gospel testimony in the world and for the unity of the church.

How is this class going to work?

Some guiding principles for this class and life:

May we have a mindset like Frederick Douglass, who was converted at 13 years old.  “I loved all mankind, slaveholders not excepted, though I abhorred slavery more than ever.  I saw the world in a new light, and my great concern was to have everybody converted.”

God alone is sovereign over all creation.  I am not God.

Three fundamental “Let us” statements show this truth and man’s rebellion against it.

In Genesis 1:26, God says “Let us make man in our image.” God is sovereign because God is over all creation, including Mankind.  God is the creator.  God is the ultimate authority.

Because God made so many different people ALL EQUALLY in His image, we can’t say that God looks like one kind of person.  As we look at God’s work in creation, especially the creation of man, let us consider three words.  Diversity.  Equality.  Hierarchy.

We are equally made in God’s image.  As part of the one human race, we are equal.

We are diversely made with different talents, abilities, appearances.

God created order from chaos.  Because of this, there are different hierarchical structures.  These structures imply authority.  While many today view authority as a bad thing, it does not mean imposing one’s will on someone else.  This hierarchical authority is evidenced by a difference in responsibility.  Created order Is not the only place this is seen.  It is also evidenced in spiritual gifts (1st Corinthians 12:3- 14:7), leaders and fools (the Wisdom Literature), and those who serve in the various roles of the early church (Acts).

The second “Let us” statement is found in Genesis 11.  The people said to one another “Come, let us build ourselves a city and a tower with its top in the heavens, and let us make a name for ourselves.” (Genesis 11:4) Throughout scripture, starting in Genesis 3, 6:5; 11:4, we see man’s sinful rebellion against God, the creator.

This rebellion is also in a third “Let us” statement.  Psalm 2:3 talks about the rulers fighting to break from the control that God has over us (See also Psalm 12:4)

Because God is the ultimate authority, his word, which according to 2 Timothy 3:16 is God-breathed, is authoritative.  Our experiences and narratives, no matter who’s they are, never trump scripture’s authority.  Paul reminded the elders of Ephesus that God’s authoritative word is able to build up those who are sanctified (Acts 20:32).

Based on the creation and fall of men, here are some of the problems with Critical Race Theory.

The traditional definition of racism is “a belief that race is the primary determinant of human traits and capacities and that racial differences produce an inherent superiority of a particular race.”  (Merriam Webster)

The contemporary definition of racism is very different.  According to CRT racism is “a system of advantage based on race, involving cultural messages, misuse of power, and institutional bias, in addition to the racist beliefs and actions of individuals.”  (Be the Bridge)

With this updated definition “the original sin of racism” addresses “white” institutions and structures.  Salvation is through reparations to non-white people and will never be complete.  This is in opposition to the original sin of the Bible addresses the sinful human heart and salvation is through repentance and trusting in the finished work of the cross.  “If many died through one man’s trespass, much more have the grace of God and the free gift by the grace of that one man Jesus Christ abounded for many” (Romans 5:15).

For class resources go to drodgersjr.blogspot.com/p/biblical-understanding.html

Posted by Drodgersjr at 3:20 PM No comments: