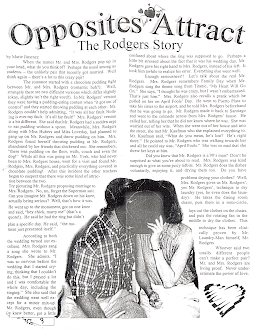 Krista recently found this article written by a high school student at Santiago Christian School in the Dominican Republic.  It was from 1998, right after we were married.  It made us laugh.  And I did not say "hey chick, marry me" when I proposed.

by Marie Jimenez
When the names Mr. and Mrs. Rodgers pop up in your head, what do you think of? Perhaps the usual among us students - the unlikely pair that recently got married. Well think again -there's a lot to this crazy pair!
The romance started with a chocolate pudding fight between Mr, and Mrs. Rodgers (romantic huh?). Well, strangely there are two different versions which differ slightly (okay, slightly isn't the right word!). In Mr. Rodgers' version, they were having a pudding-eating contest when "it got out of control" and they started throwing pudding at each other. Mr. Rodgers couldn't help admitting, "It was all her fault. Nothing is ever my fault. It's all her fault!" Mrs. Rodgers' version is a bit different. She said that Mr. Rodgers had a sudden urge to eat pudding without a spoon. Meanwhile, Mrs. Rodgers along with Miss Hubers and Miss Loveday, had planned to gang up on Mr. Rodgers and throw pudding on him. Mrs. Rodgers found herself throwing pudding at Mr. Rodgers, abandoned by her friends that chickened out. She remembers, "there was pudding on the floor, walls, couch, and even the dog!" While all this was going on Mr. York, who had never been to Mrs. Rodger's house, went for a visit and found Mr. Rodgers, Mrs. Rodgers, and practically everything covered in chocolate pudding! After this incident, the other teachers began to suspect that there was some kind of attraction between the two.
Try picturing Mr. Rodgers proposing marriage to Mrs. Rodgers. No, no, forget the Superman suit. Can you imagine Mr. Rodgers down on his knee, actually being serious? Well, that's how it was. He went up to the monument, got on one knee, and said, "hey chick, marry me" (that's a quote!). He said he had the ring but didn't plan a specific day. He said, "the moment just presented itself"
According to both, the wedding turned out excellent. Mrs. Rodgers sang a song she wrote to Mr. Rodgers. She admits, "I was so nervous before the wedding that I started crying, thinking that I couldn't do this, but I prayed a lot and I was comfortable the whole day, including the singing." She also said that the wedding went well except for a minor mix-up. Mr. Rodgers, even though he knew better, got a little confused about where the ring was supposed to go. Perhaps a little bit stressed about the fact that it was his wedding day, Mr. Rodgers gave his right hand to Mrs. Rodgers, instead of his left. It took him a while to realize his error. Everything else went well.
Enough seriousness!! Let's talk about the real Mr. Rodgers. Mrs. Rodgers remembers Family Day when Mr. Rodgers sang the theme song from Titanic, "My Heart Will Go On." She says, "I thought he was crazy, but I wasn't embarrassed. That's just him." Mrs. Rodgers also recalls a prank that he pulled on her on April Fools' Day. He went to Puerto Plata to take his sister to the airport, and he told Mrs. Rodgers beforehand that he was going to go. Mr. Rodgers made it back to Santiago and went to the colmado across from Mrs. Rodgers' house. He called her, telling her that he did not know where he was. She was worried out of her wits. When she went out of her house and into the street, she met Mr. Kaufman who she explained everything to. Mr. Kaufman said, "What do you mean, he's lost? He's right
there." He pointed to Mr. Rodgers who was walking towards her and all he could say was, "April Fools." She was so mad that she
threw her keys at him.
Did you know that Mr. Rodgers is a 90's man? Don't be surprised at what you're about to read. Mrs. Rodgers was kind enough to give us some juicy tidbits. Mr. Rodgers does the dishes voluntarily, enjoying them, and drying them too. Do you have problems drying your clothes? Well, Mrs. Rodgers gives us Mr. Rodgers' technique to dry laundry (yes, he even does the laundry). He takes the dining room chairs, puts them in a semi-circle, lays out the clothes on the chairs, and puts the rotating fan in the middle to dry the clothes. This technique has been clinically proven by Mr. Rodgers.
Whoever said two different people estimate the power of love!
Posted by Drodgersjr at 9:23 PM